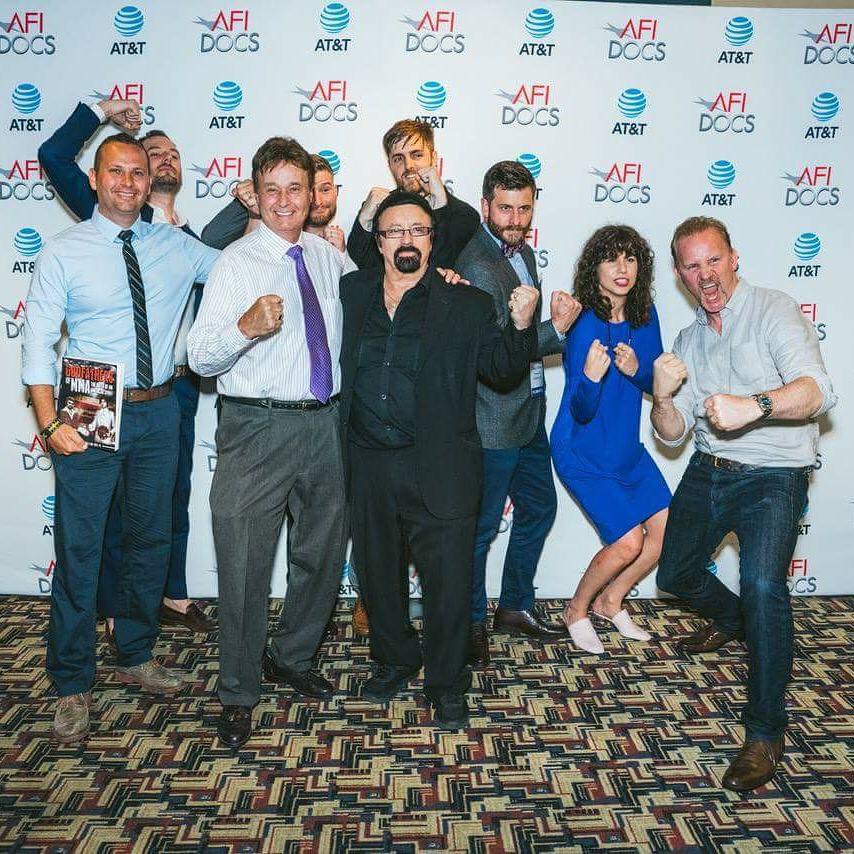 Renowned local martial arts instructors Frank Caliguri and Bill Viola already believed that, and after more than 35 years, their work came to fruition with the June premiere of the feature-length documentary “Tough Guys” at the 2017 AFI Docs Film Festival last month in Washington, D.C.

The film details the early days of mixed martial arts, which Caliguri and Viola created in the late 1970s. Then known as “Tough Guy Championships,” the first competition took place in March 1980 in New Kensington.

“It was really amazing when you think of two small-town guys and on a national level,” said Viola, of North Huntingdon. “This documentary is going everywhere. We reached for that star 35 years ago, and all of the sudden it’s coming back to us.”

The buzz surrounding the film made tickets for the one-time showing tough to get. Of the 118 documentary films that premiered during the five-day festival, held June 14-18, “Tough Guys” holds the distinction of being the first film to sell out while also being recognized as one of the festival’s 10 “Spotlight Films.”

“It was kind of awing to be a part of this,” said Caliguri, of Lower Burrell. “It was awesome, and I couldn’t believe how they put this together.”

It was late 1978 when Viola and Caliguri met at the Monroeville Denny’s restaurant and asked the age-old question: Who would win a fight between Muhammad Ali, Bruce Lee and Bruno Sammartino? It was a question that gave birth to a sport with roots firmly planted in Western Pennsylvania and became widely popular in the 21st century with the help of organizations like the Ultimate Fighting Championship.

“We called it ‘combined fighting.’ Mixed martial arts is a term they’ve used over the past few years,” Viola said. “(Frank and I) knew that it had to be a combination of all the (fighting) disciplines for there to be a winner.”

But while Caliguri and Viola set out to answer the age-old question, the state of Pennsylvania stepped in and shut down “Tough Guy” contests in large part because the state had no governing jurisdiction over “combined fighting” events like it had over boxing and professional wrestling. Caliguri and Viola sanctioned the contests under CV Productions. The state legislature became the first in the country to pass a ban on all mixed martial arts fighting and specifically named CV Productions in its ruling.

Not until 2007 did mixed martial arts competitions become legal in the state.

“We were selling out our shows and boxing wasn’t doing anything, and we didn’t fall under the jurisdiction of the state athletic commission, so they weren’t getting their 5 percent (of the earnings),” Caliguri said. “At that time, they were nickel-and-diming us to death with legal stuff.”

And just like that, Caliguri and Viola were advised to quit promoting “Tough Guy” contests in early 1981, leaving the age-old question to go on unanswered.

“They legalized it 15 years after me and Frank started it,” Viola said. “It’s like inventing the TV, and we can’t turn it on for 15 years.”

Year’s later, Viola’s son, Bill Jr., figured it was time to set the record straight as to the origin of the sport of MMA before revisionist’s history took over and completely wiped out Caliguri and his father’s accomplishments. He co-authored with Fred Adams the book “Godfathers of MMA: The Birth of an American Sport,” which became the basis for the documentary.

“My motivation was Frank and my dad had this billion-dollar idea back in the late ’70s and had a shot at doing it, but things weren’t in their favor at the time,” Bill Jr. said. “I knew in the back of my head that this was nothing new. I felt it my duty to tell this story before it was lost forever.

“The integrity of the sport was in jeopardy.”

Before the documentary was made, “Tough Guys” still was seeking legitimacy and credibility in a sport where the fan base rose dramatically since its mainstream and commercial debut in the mid-1990s.

Then came CV Productions’ public relations representative Mike Murray, who after seeing a commercial for the Heinz History Center Sports Museum, set out to make the claim that MMA was rooted in Western Pa.

Murray and Dave Jones hold the distinction of fighting in the first “Tough Guys” match when CV Productions held the event in front of an over-capacity crowd at the New Kensington Holiday Inn in 1980. Jones got the better of Murray that night as Murray’s corner man threw in the towel with 8 seconds remaining in the match.

“I thought we were the first MMA league, and I called the curator and finally after a few months (the curator) said get some documentation together, bring it down and we’ll go over it,” Murray said. “Finally after almost eight or nine months she called me one day and said they were going to do it and called me a few months later and said they were going to open the exhibit.”

The Heinz History Center exhibit caught the eye of W.B. Zullo, who co-directed “Tough Guys” with Henry Roosevelt. Renowned directors Ross Kaufmann — Zullo’s cousin, who won an Academy Award in 2004 for best director in the feature-length documentary category for his film “Born into Brothels” — and Morgan Spurlock — whose film “Super Size Me” was bested for the Oscar by “Born into Brothels” — came to the film as executive producers.

“It was an amazing story and a story that nobody really knows,” Spurlock said.

“Good things take time. These guys are such underdogs, and it’s what a real ‘Rocky’ drama is all about.”

Everybody is tight-lipped about the future of “Tough Guys,” but people will get a chance to view the documentary in the near future as the film’s directors are in talks with studios.

The plan is to hold a Pittsburgh premiere once a deal is reached. Caliguri said theBenedum Center would be ideal for the “Tough Guys” premiere, as it is the former Stanley Theater, where the first Tough Guy finals matches were held April 18, 1980.

“The people were cheering the whole way through because it was a such crazy movie,” Caliguri said. “They all stood up, cheered and clapped when it was over.”

William Whalen is a freelance writer.