As Viola describes the scene, “Every fighter brought his own little army with him. It was like regiments in the Civil War, but instead of flags, they all had signs.”  A hundred or more members of the Erie gang The Lower East Side Federation came in their black LEF t-shirts and waved signs touting their fellow LEF member Danny “Mad Dog” Moyak (boasting 400 street fights under his belt).

The signs read:  Beware of the Dog, and the gang plastered the ballroom, hallways and bathrooms with them.  “Half the crowd was chanting ‘Crazy Jack!  Crazy Jack!’ for local favorite Jack Reynolds, and the other half was chanting ‘Mad Dog! Mad Dog!’” 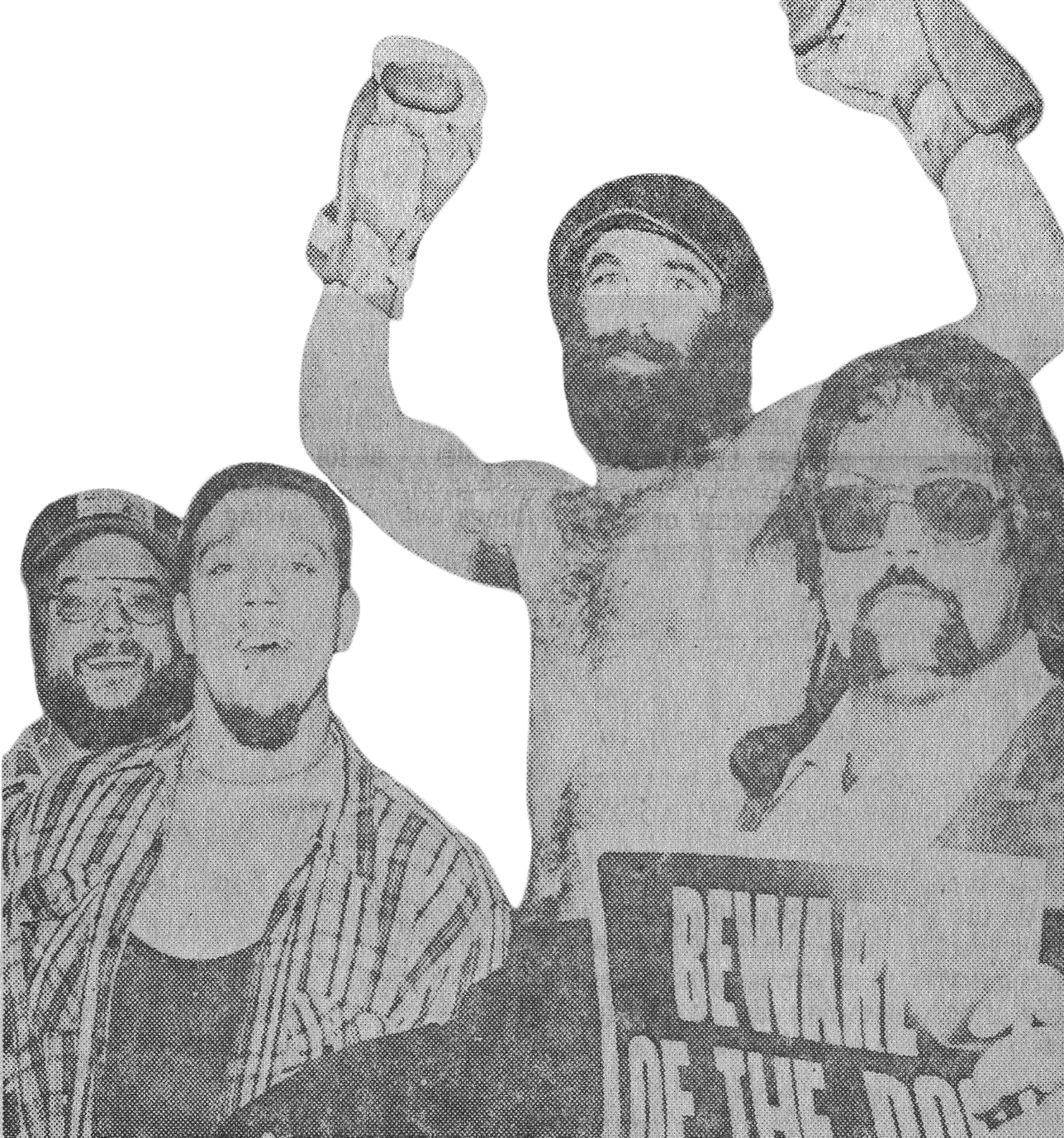 The 40-day-old Iran hostage crisis loomed large in the minds of all Americans.  In the poster photos more than one contestant wore a popular T-shirt of the day: a picture of the Ayatollah Khomeni and the slogan “Iran Sucks.”  In the parking lot, cars sported bumper stickers like “Piss on Iran” and “Nuke Tehran.”  The frustration all Americans felt, the powerlessness to end the situation, created for the moment a sense of cohesion, of national unity that transcended political party, economic status, race, and social class, and when the national anthem played at the start of the event, everyone in the room jumped to his feet.  Everyone; bikers and bankers, rich and poor, put a collective hand over the heart of the crowd and sang as one with a fervor that reaffirmed their identity as Americans. 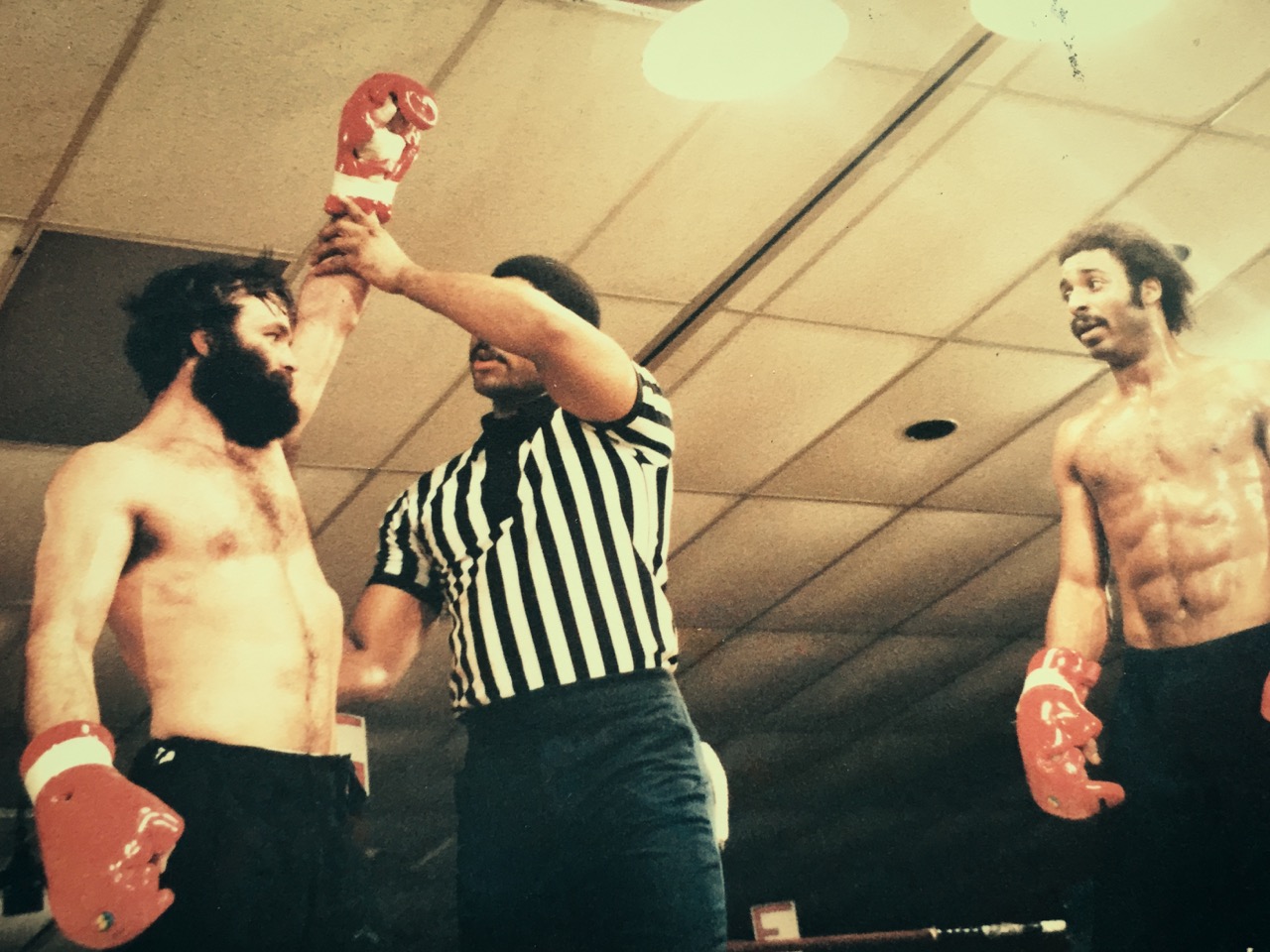 Finally, it was time for the main event, local legend “Crazy Jack” Reynolds versus Erie street gang member “Mad Dog” Danny Moyak. Moyak’s hair and beard bristled out of his headgear making him look like a werewolf, and Crazy Jack looked—well, crazy.

Viola recalls, “It was the last fight of the night, and it had all the makings of a classic. The ballroom was completely divided; New Ken versus Erie. Bell to bell, the Lower East Side Federation never stopped barking; it was their ‘standard’ intimidation tactic. Their ringleader, Dann Carr, equated the LEF presence to that of the ‘Oakland Raiders,’ (fans who traveled in packs to create a home field advantage wherever they played).  Carr’s nasty bunch of bikers stacked the front rows. The New Ken locals heckled back; they weren’t in the mood to play nice either. It was a war.”

Moyak popped his jab, trying to keep the raging Reynolds at bay.  As Crazy Jack steamrolled ahead, the two seemed to abandon any type of pre-fight strategies and just started banging. Viola remembers, “Exchange after exchange they were swinging for the fences. I remember in the third round Reynolds threw a haymaker hook that rattled Moyak pretty bad, I thought he was going down. As Jack pressed forward, Mad Dog countered with a devastating knee to the ribs. Any one of the blows would have knocked out lesser men. The crowd jumped at every single shot landed.”

The punishing fight had to be stopped temporarily when a vicious roundhouse punch from Moyak sent Reynolds’ mouthpiece and teeth flying into the crowd, Caliguri remembers, “It didn’t faze Reynolds at all; he actually smiled at Moyak  with the old, ‘is that all you got’ look on his face.  There wasn’t a fan in the house sitting down.  I had Jacky ahead, but it was up to the judges.”  Viola remembers, “It could have gone either way. I had it dead even. Everyone in the building wanted to see an extra round.  I turned to the timekeeper ringside and said I’m already planning the rematch.”

Awaiting the scorecards, both men paced around the ring, hands held high.  The battle cries started once again, “Mad Dog! Crazy Jack! Mad Dog! Crazy Jack!”  Tribune-Review sportswriter Defeo reported, “It was the closest bout and most aggressive fight of the night. He [Reynolds] lost a close decision 89-88.” The LEF crew exploded with approval; the hometown boys booed.

Reynolds accepted the ruling like a man. “He was tough,” said Reynolds, unwilling to dispute the decision even though one judge ruled it a draw. “He [Moyak] hurt me with a knee, and that tired me out.” Viola adds, “If Mad Dog didn’t catch him with that knee, Jack may have been able to finish him, but it was fitting that it went the distance.”

Reynolds told Caliguri after the bout.  “I gotta have a talk with my dentist.  He guaranteed me that bridgework wouldn’t come loose.” Caliguri adds, “He was still in good spirits joking with us, just a little gassed. Neither man knocked each other out, so the rivalry would live another day.” Mad Dog moved forward in the brackets, but both men earned respect that night.  Viola explains, “It was a phenomenal way to end the show and it gave us our first real villain. Mad Dog was the one guy that everyone loved to hate.”

A capacity crowd had witnessed history in the making. Viola remembers, “It was everything we expected and more.  The energy inside the building was something that just can’t be put into words.  Fighter’s Only Magazine would later describe it as having, “Lightning in a bottle.” Viola continued, “What we found really interesting is that the spectators didn’t want to leave even after the fights were over.  They all wanted to meet the fighters or take a picture with the ring girls.  These guys were treated like celebrities after the first fight; everyone was in awe of them.  Security had to practically drag the fans out that night. Success is an understatement. We didn’t hit a homerun, it was a grand slam.”